Why is hay so important for rabbits?

Hay might look boring to humans but for rabbits it's their main dish of the day, with 80-90% of their diet needing to be hay! (and grass is very good too!) It keeps them healthy and helps them function in a number of ways, the main ones being:

What is GI Stasis?

It stands for GastroIntestinal Stasis and is also known as 'the silent killer' as you have to watch carefully for it. G.I. Stasis is the condition of food not moving through the gut as quickly as normal. The gut contents may dehydrate and compact into a hard, immobile mass (impacted gut), blocking the digestive tract of the rabbit. Food in an immobile gut may also ferment, causing significant gas buildup and resultant gas pain for the rabbit.

The first noticeable symptom of G.I. Stasis may be that the rabbit suddenly stops eating, or may not be pooing. You MUST take your rabbit to the vet if he shows either of these symptoms, or any other change. If not, it can become fatal within 24 hours.

How much hay should rabbits eat and how often?

They should eat a bundle of hay their own body size every day! They need access to clean hay every day (no one likes dirty or stale food!) and in unlimited portions. Make sure wherever they are they have access to fresh, clean hay to snack on, and access to water to keep the hay going down nicely. Yesterday's hay can be moved to their toilet area, with a nice fresh pile of hay in its place.

Is all hay the same?

No! There are many different types and if you shop around you'll see it ranges from cheap, dusty, yellow short bits of hay (avoid!) to luscious, sweet-smelling green hay. Timothy hay is the most popular, but you can also find others such as oat hay. Alfafa hay contains a lot of calcium and protein (which adult bunnies don't need a lot of) so feed sparingly. 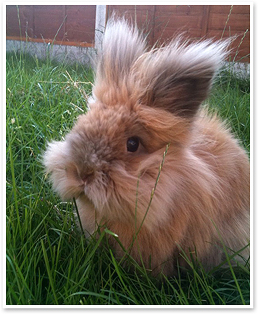 Lily and Billy are fans of Green Oat Hay, Meadow hay, and a large bale of hay from the local farm (sometimes we mix the hay, sometimes we alternate them). Hay bales are good for their toilet as it's cheaper, with more expensive hays kept in separate piles to munch on. Experiment with hays and grasses - a wide range is available, some with dandelions and herbs mixed in!

My rabbits won't eat hay, can I give them something else?

All rabbits need to eat hay, but they can be fussy (well they do have over 17,000 taste buds - that's 7,000 more than humans!) so you just need to find one that they like and make sure they're not filling up on other foods. See tips below for getting them to eat more hay. In the meantime, make sure they have access to grass as this is also good for them and acts in a similar way to hay. If they don't currently eat grass, wean them onto it slowly to avoid upset stomachs. Don't feed them grass from lawnmowers as the way it's chopped causes it to ferment, which is bad for their tummies, and only feed grass that hasn't been near traffic fumes.

Some examples of the wide range of hays available... 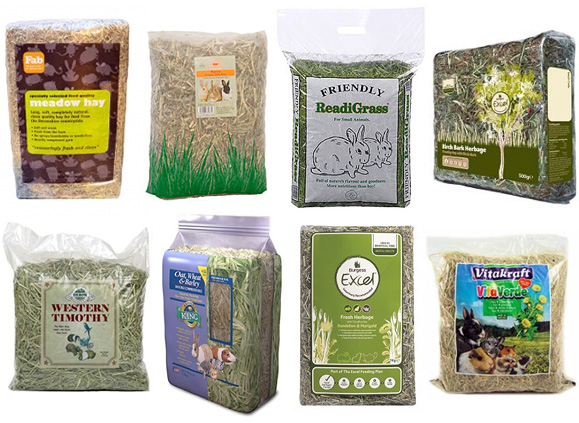 How can I get my rabbit to eat more hay?

A common problem with rabbits! Bunnies love to eat and nibble on things, and will always choose tastier things than hay given the chance. Here are some tips to get your rabbits eating more hay:

Do you have any tips for making your rabbits eat more hay?
Post them on our Facebook page!

What do rabbits eat?

A domestic rabbit's diet should mimic the wild as much as possible. This means 80-90% good quality hay, a range of vegetables, herbs, plants, a small amount of fruit, and a few pellets. Muesli-style food should be avoided. Lettuce shouldn't be given, and carrots are very high in sugars…continue reading

A rabbit's main diet is hay, but they can also enjoy fruit, vegetables, herbs, plants and weeds. Here is a list of safe foods that bunnies can eat…continue reading