Why every rabbit needs a friend

Should I get my pet rabbit a friend?

Absolutely! It's one of the best things you can do to make your bunny's life a happy and fulfilled one. Rabbits in the wild live in big groups and are very sociable animals, so it makes sense that they should live with at least one other bunny friend! Once you have witnessed a bonded pair of rabbits interact together, it's unlikely you would ever want to keep a solitary rabbit.

While rabbits do enjoy human company and will tolerate or enjoy living with other animals, it does not replace the fact another rabbit will be the best companion for them where they can talk the same language, understand each other's body signals, and play, groom, relax, eat together and look out for each other.

Which pairing of rabbits is best?

The best and easiest pairing is a neutered male and a spayed female. It is possible to have any pairing of males and females, especially if they've been brought up together from birth, but a male and female is the most likely to get along. Even if you have 2 girls or 2 boys, they should both be neutered in order to make them a healthier and more relaxed pair. Same with a mixed pair, don't just get one neutered or it will lead to one calm bunny and one over-amorous, frustrated bunny!

I have a pair of rabbits but they have started to fight!

In the wild, rabbits in groups all trust each other, but those from other groups eg. from neighbouring fields may fight with rabbits which they don't recognise. It's the same with domestic rabbits - they all need to learn to trust each other. Billy and Lily were both from different rescues, Lily was shy and found it hard to trust Billy at first. He would come bounding over to her to play and she'd think he was about to attack her, so she bit him in defence. Billy thought Lily was starting a fight and fought back. They had to be 'bonded' and are now best friends! Bonding is where you teach the rabbits to trust each other and get them used to each other. Rescues can help you with this, or introduce you to an already bonded pair to adopt.

If you have a couple of bunnies which you have had since they were babies and now they are a few months old and starting to fight - they have most likely reached sexual maturity - their hormones have kicked in - and need to be neutered. You can read more about why you should neuter your rabbits on our page: Why neuter your rabbit?

A pair of rabbits? But I can only afford one 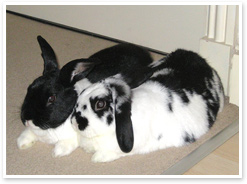 If you can only afford one rabbit then you shouldn't really buy one at all. It is becoming more widely known that rabbits that live in groups or pairs are so much happier, those that live alone can easily become bored, lonely and depressed. Imagine sitting on your own all day with no other humans to talk to for the rest of your life - you'd wish you had at least one friend to talk to!

When you have a pair of rabbits the only added expense really is vet bills - vaccinations and checkups for example, plus a bit added onto the food bill! With regard to housing, your 2 bunnies will share everything so you still only need 1 water dish, 1 food bowl, 1 toilet etc. 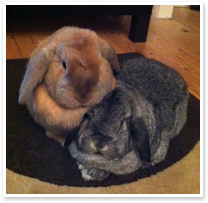 What about a guinea pig instead of a second rabbit?

Fantastic and good on you! Contact your local rescue (Click here to search for your nearest one) and they will help you and give great advice. Some rescues allow you to bring your exising pet bunny along for a 'date' where you can let your rabbit choose which one he gets on with the best! Some of the best pairings work this way. To your bunny, looks, size and age don't matter, though if you prefer to get one of a similar age then rescues have bunnies of all ages.

Very occasionally you will get a rabbit that just won't bond with another bunny. Don't give up straight away as sometimes it can take a few months to bond a pair of rabbits! The hard work is worth it so try and persevere through the tough times and rescues are always there to help and advise! (Some rescues do the bonding for you). Ensure both rabbits are neutered to stop hormones getting in the way. Failing that, try another bunny friend. Rescues will arrange 'dates' for your rabbit to meet a few and choose his/her own friend! But please don't assume your rabbit doesn't want a pal. Lily and Billy had a lot of fights during the bonding process until they learnt to trust each other, and now they never leave each other's side! If after trying hard (and your bunny just isn't happy with any another rabbits) then you'll have to give her even more attention! Keeping your single bunny indoors as a house rabbit will help her get the company and interaction bunnies need. Whatever happens, rabbits need lots of love and company, whether it be bunny or human :)

Can guinea pigs live with rabbits?

Contrary to popular belief, rabbits and guinea pigs should NOT be paired together or live together in the same hutch, for a number of reasons including diet, language, behaviour, environmental needs and diseases. Rabbits should only be paired with rabbits…continue reading